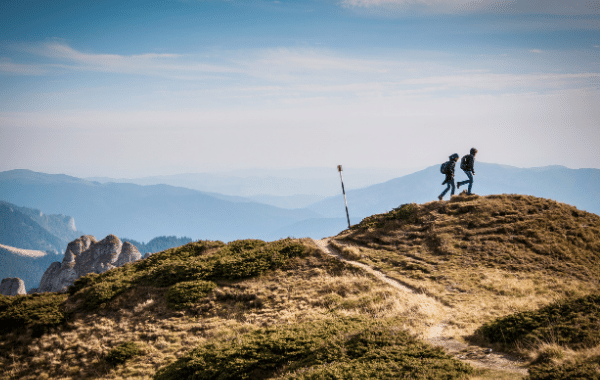 Our story is a story of two families.
Firstly, brothers David and Michael from Kidlington, Oxfordshire. David had the opportunity to take part in the scheme as an apprentice toolmaker with Pressed Steel, Oxford (now the Mini Plant). as a Direct Entry Silver participant. David was presented with his Gold Award in 1965. Michael joined the scheme through the Oxfordshire Association of Boys’ Clubs as a Direct Gold entrant and was presented with his Gold Award in 1969.
A short distance away in Oxford City, sisters Ann and Mary began their D of E at Bronze level. Their secondary school encouraged young people to participate in the scheme. Ann and Mary recall how the boys and girls were given some very different activities in the 1970s. For example, girls took part in the Design for Living strand of the scheme. Ann and Mary both did ‘The Art of Entertaining’. Ann and Mary worked their way through the Silver Award with Mary being presented with her Gold Award in the 1980s.
Meanwhile Ann put the scheme on hold to complete 'A' levels and her teacher training course. It was during a teaching placement that a member of staff mentioned that she needed help with her Brownie Unit. Ann duly volunteered and, at a planning meeting, the subject of the D of E scheme came up. Ann was encouraged to resume her work towards her Gold Award, which she then completed.
Ann and Mary’s brother, Keith, also worked his way through the Bronze, Silver and Gold Awards. Keith’s daughter, Anita, is currently working towards her Gold Award.
Oxford had a thriving Gold Award Holders’ group which enjoyed a range of social activities as well as helping out with aspects of the scheme such as expedition training. On completion of his Gold Award, Michael joined the group as did Mary and a little while later, Ann.
No doubt there are many D of E happy endings, and our story has just such an ending. Ann and Michael were married in 1985 and have the scheme (and that Brownie leader) to thank.
Donate
Add your memory
Share:
Previous memory
Next memory