When it comes to Outdoor Education, Lathallan School is sector leading. For the past four years, the Aberdeenshire-based school has had the highest uptake and completion rate of all independent schools in Scotland for The Duke of Edinburgh’s Award. The three-year average from 2015 to 2018 is unrivalled with 100% completion rate at Bronze, 76% at Silver and 22% at Gold.

The DofE is embedded in the school timetable and is delivered by Lathallan’s highly-qualified Head of Outdoor Education, James Woodhouse. His ambitious, adventurous and achievable DofE lessons make full use of the school’s unique location. Just one hundred meters from the North Sea and within an hour and a half’s drive of some of Scotland’s most iconic mountains, Lathallan’s setting and highly-driven outdoor education staff help advertise the benefits of DofE to their pupils from a very young age.

Earlier this year, the school took a group of three-year-old nursery children rock scrambling on a sea cliff and a year ago, successfully got all 28 participants to the top of Mount Kilimanjaro. In September Lathallan Junior School pupils were prepared for DofE by climbing five Munros in one day, before abseiling the very next morning.

With plans to take a crew of Lathallan pupils sailing off the West Coast of Scotland in 2019 and an eagerly-anticipated Naples to Athens sail scheduled for 2020, James Woodhouse firmly believes in setting the bar high for pupils participating in the DofE.

He said: “Young people are far more capable than we as adults remember or understand. The only reason a young person limits themselves, is because the adults limit them. As you grow up, you forget what it is like to be a child.

“Children at Lathallan engage with outdoor learning very early on. We have two eighty meter on-site zip-wires that are used by children of all ages, including the nursery pupils.”

“We try to remove psychological barriers and fear and give parents an insight into how capable their children are. By the time the children turn 14 they are far more eager to sign up to start their DofE journey.”

James Woodhouse has been mountaineering for 30 years. His experience with DofE is augmented by his direct involvement with the John Muir Award and his role as Technical Advisor for the National Navigation Award Scheme. Pupils benefit from all three, with the pinnacle of Lathallan’s recent success their 2017 Mount Kilimanjaro expedition – where all 28 participants, staff, pupils and parents reached the top.

He added: “We started off with twenty- eight at the foot of Kilimanjaro and all made it to the top. When you consider an estimated 50,000 people attempt it every year but many don’t reach the top, that’s an incredible achievement.

“I place a lot of value on DofE. It is a big player in the outdoor world and it’s hugely beneficial for children and young people to achieve DofE success. Having curricular time in the school day for DofE, helping pupils with eDofE and finding volunteering opportunities all can facilitate success.

Ultimately, however, if you are incredibly enthusiastic about DofE the children will be as well. If you’re up for it – they will be.” 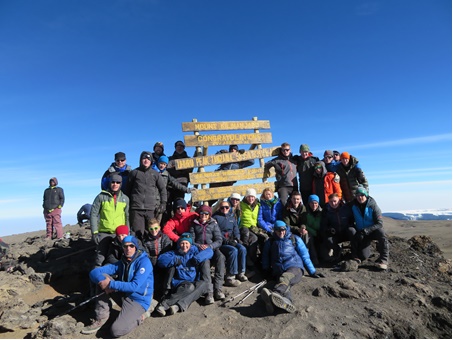