A range of team challenges for Bronze expedition groups 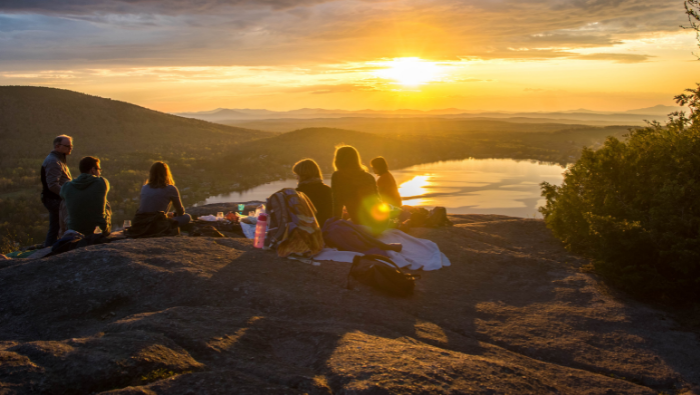 We spoke with the DofE Manager at Southend High School for Girls in Essex about how they ran their expeditions with a difference.

1. What were the expedition aims?

Participants chose a range of aims, including investigating the accessibility of footpaths for all users, soil sampling in different habitats, exploring the history of the local area, creating a scary story based on their expedition, making motivational words with their own bodies, writing a poem about their expedition, finding evidence that fairies and ‘galumposaureses’ exist.

The training was done entirely through assessments on Teams – each participant had to do every assignment individually, rather than as a group, although they did get together at lunchtimes to plan their routes.

The first day of the expedition was mostly on the school field. Participants completed team games on communication – the Leaders created a tough orienteering game with puzzle questions and compass challenges to find things around the school site. Participants then began a walk where they also came across First Aid scenarios. They made a hot drink on the Trangias to go with their packed lunches. After lunch they had to work in their groups to create a six-piece story board made from the things they could find on the school field. Participants cooked and ate their evening meal and then went home for the night and came back to cook breakfast early the next morning and carried on with the expedition.

On the second day of the expedition, participants completed a longer walk. Groups left at five-minute intervals to help to spread them out over the initial distance through the urban outskirts of Southend. Half of the groups began by heading through the surrounding urban area to cross the bridge over the dual carriageway, and the other half went through the housing estate opposite the school and through a pedestrian tunnel that goes under the same busy dual carriageway. Half of the groups then travelled Northeast up to the River Roach, and the other half travelled Northwest. Both routes finished back at Garon’s Leisure, where there is a large car park for parents to collect participants. During both routes, once through or over the dual carriageway the area is rural – there are small villages, farms, fields, and a sea wall with plenty of public footpaths to make it challenging.

The school was operating in bubbles – the Year 9 bubble was in the Maths block which backs onto the field so participants could use the toilets there and sinks for washing and teeth cleaning. As the block is separate from the rest of the school it could be safely left unlocked overnight.

Inside the buildings everyone wore masks – the school field was large enough for each group to have two x 3-man tents and be away from other groups. The groups did not interact in any way during the expeditions but completed activities in their own groups. We had trained staff who all did round robins for the activities, plus the staff that would have been teaching the year group on the first day of the expedition (a Friday) also providing support.

Participants were very excited to be doing something as it was the only trip the school had run that academic year – Year 9 were disappointed they could not camp, but they knew it was for their own safety. Staff were happy to see the smiles of the participants and as usual gladly helped. Parents were grateful the school had given participants the opportunity to do the expedition, even it was a little different to usual.

“The outcomes for the young people were perhaps greater than in a ‘normal’ year as they knew the school had gone all out to enable the expedition to go ahead, and judging by some of the presentations I was sent they had a lot of fun along the way which they will always remember.”