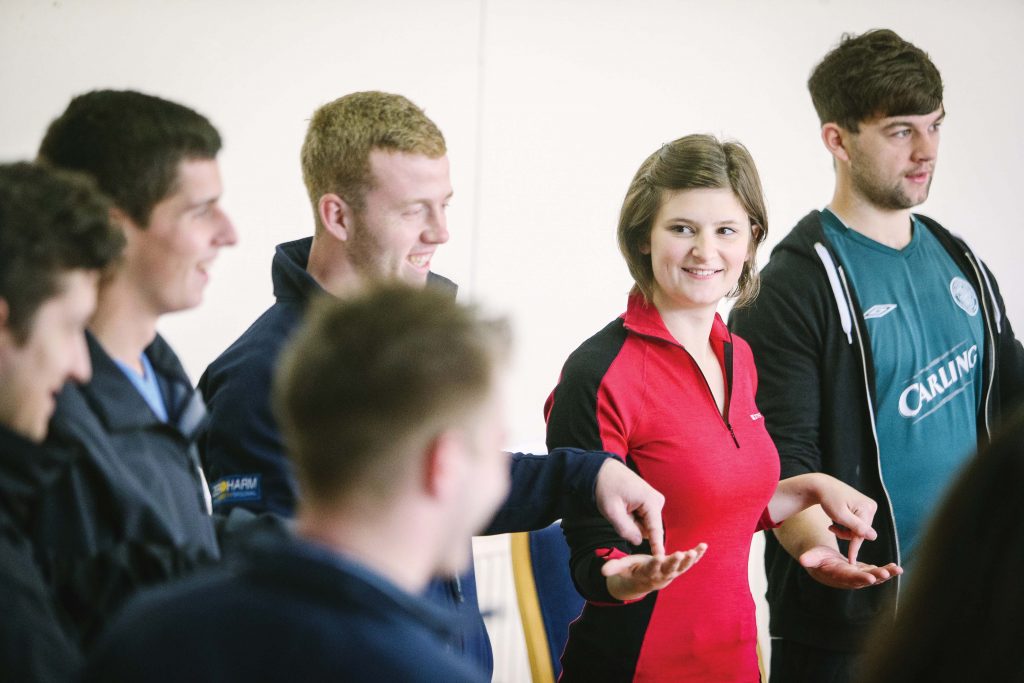 Here’s a great collection of energisers, games and activities to help people get to know each other.

Whether you’re running a youth group, working in a school or working in an adult training environment, there’s something here to help even the most shy and reserved individual to come out of their shell and feel part of your group.

Players: 8+ Time: 10-15 mins Equipment: ball
Players sit in a big circle. A ball or other item is held by the Leader, who passes it to a player at random, saying first their own name, then the one to whom it was thrown, e.g. “Tim to Ollie”. This player must immediately say their own name and then another player’s name while passing it to that person. They must not pass it to their neighbour nor, when it comes to them again, can they pass it to someone they have passed to previously. This is a good, fun game to help people get to know the group members’ names. Tip: Play a piece of music with a steady obvious beat and see if players can pass the ball and say the names whilst keeping to the beat.

Players: 8+ Time: 10-15 mins Equipment: quiz sheet, pens
Prepare a sheet of paper with a list of characteristics (equal to the number of players), such as ‘has brown hair’, ‘wears glasses’, ‘has a pet rabbit’, ‘is left-handed’ etc. Players each have a sheet and a pen and must go around the group and get the signature of someone with each characteristic. People can only sign their name once on each sheet, so there may need to be some crossing out as people with rare characteristics are discovered. This is a great getting-to-know-you activity and can make some individuals suddenly become highly sought-after for their signatures.

Players: small groups Time: 20-30 mins Equipment: bamboo canes, newspapers, sticky tape
In groups, players are challenged to build a water-resistant shelter using the bamboo canes, newspaper and tape. The shelter must be large enough to accommodate all members at the same time. At the end of the time limit teams gather in their shelter and the Leader throws cups of water over it to test its effectiveness.

Players: 5-10 Time: 10-15 mins Equipment: blanket/large towel
A group of five-ten players stand on a blanket or towel. Their challenge is to work as a team and turn the blanket over so that everyone is standing on the other side of the blanket at the end. Nobody may touch the ground beneath or around the blanket at any time during the exercise.

Players: pairs Time: 10-15 mins Equipment: none
Two players stand in front of the group. The Leader starts them off by saying something like “School is closed tomorrow because of bad weather”. Player One must then say: “the bad news is that…” and say something relevant to the topic, such as “The bad news is that we’ll miss our gym session”. Player Two then says: “The good news is that….” And says something relevant to the topic, such as “We were having to go on a five mile run”, hopefully, countering whatever the bad news was. This can continue for as long as appropriate before repeating with a new pair and new topic.

Players: pairs Time: 10-15 mins Equipment: blindfolds
In pairs, one person is blindfolded. Their partner must take them for a walk in a safe area, but one which has obstacles, such as tables, trees etc. The sighted person must guide the sightless one around the area using only speech – no bodily contact is allowed. As trust builds up, so should the pace – can any of the pairs jog around the area?

Players: 3+ Time: 5-20 mins Equipment: 2 chairs
A Leader arranges two chairs in front of the group and sets the scene. This is a TV studio chat show, where the Leader is going to interview the world’s foremost expert on a particular subject. They welcome a member of the audience chosen at random to come and sit with them, introducing them as, for example, “Professor Mindstorm, who is has just created a rocket that runs on seawater.” The interviewer has a list of prepared technical questions that are put to the ‘expert’. The expert must chat knowledgeably about the subject. For example, a question could be “I hear you’ve come up with a clever way of getting more water when the rocket lands on the moon, tell us about it…” The interviewer can give a bit of help if the expert falters, with ‘leading’ questions, such as “Tell us about your last visit in the rocket to Mars, I understand you had a surprise when you landed there.” (If that doesn’t help, you could add “didn’t it involve finding something odd?”) Expert roles could include: Making sculptures from jelly; Collecting sausages; Railway train numbers; Wallpaper history; Baked bean art; How the Moon landings were faked; Why the Prime Minister is an alien.

Players: 3+ Time: 10-20 mins Equipment: none
Three players stand in front of the group – they are the supercomputer which knows the answer to every question. Players from the audience can each ask a question. The three players must then answer the questions but can only say one word each, taking it in turns (1,2,3;1,2,3, etc.). This is a great test of teamwork as the three players must try to work out quickly where their sentences are heading. Questions could be anything, as long as they require fairly lengthy answers, such as “What is the best way to pack a rucksack?”.

Players: 4+ Time: 15-30 mins Equipment: none
Two players stand in front of the group and start improvising a scene on any topic, or one described by the Leader or suggested by the audience, such as “Sam is trying to sort the equipment store and keeps finding unusual things”. A third player joins them and changes the situation somehow. One of the original players must find an appropriate reason to leave the scene and sits down. A fourth player joins, and so on.

Players: any Time: 10-20 mins Equipment: none
One person sits in front of the group. They are given a topic which has two sides to it, such as “DofE expeditions should last for ten days at Gold level” or “Children should not be allowed to eat fatty food”. They start by arguing the case but, when the Leader blows a whistle, they must immediately continue talking but argue the case against the proposal. The Leader can blow the whistle as many times as they wish. How smoothly can the politician change their stand on a subject? Repeat with a new politician and different topic.

Players: any Time: 15-30 mins Equipment: none
Small groups are given a piece of paper, with a scene written on it. They then have to organise themselves into a tableau of that scene – can other groups correctly identify the scene being portrayed? Suitable scenes could include: speech day, wedding, World Cup champions, a busy kitchen, World War 2, end of a DofE expedition.

Players: 12+ Time: 10-15 mins Equipment: none
Players stand in a large circle. One player starts by saying “Whoosh!” and waving their arms up and down, like a Mexican wave in a football stadium. The player on their left repeats this, as does the next… and so on. Hopefully, the speed will pick up. When it’s working well, stop the wave and explain that, at any time, any player can hold their hands up and say “Whoa!”, at which point the wave changes direction and goes back from where it came. Once that is successful, take it further with one player, when the wave comes to them, pointing to someone opposite the circle and saying “Zap!”. That person then continues the wave in the direction it was going. Note: a ‘zap’ can only be followed by a ‘whoosh’. This is a great activity for team building, especially with large numbers.

Players: 5+ Time: 10-15 mins Equipment: none
Five people are selected to stand in front of the audience and are each given a role to play. Roles could include: a priest, the Prime Minister, a teacher, student, newsagent, police officer, burglar… etc. The scene is set that they are in a hot air balloon drifting over the Grand Canyon and it is going to crash due to lack of fuel to keep it airborne. Four of them have to jump out to their deaths in order that one may survive. They then have two minutes each in which say why they should be saved. The audience may ask questions after all have spoken and can then do a secret vote to say who should be saved. Extend this activity by naming the players and their characters a week in advance of the debate. Players come to the debate the following week in suitable costume and with prepared arguments.

Players: any Time: 5-20 mins Equipment: assorted items (see below)
Players sit in a wide circle and are each given an object gathered at random, from rubber ducks to washing up bowls. The Leader starts the story by introducing some characters and a situation, and somehow includes the object they are holding. After a short while, they ask someone to take up the story. This player must continue the tale in as logical a way as possible but must include their own object. The Leader can interject as appropriate and invite another player to continue the story. Players cannot relax after they have spoken, as they may be called upon a second time.

Players: any Time: 15-20 mins Equipment: paper and pens
Divide the group into two teams. Give each person a piece of paper and ask them to write three unusual or interesting facts about themselves that will be hard for others to guess. This could include: I have a pet chicken; I was born overseas; I have met a member of the Royal Family. Collect the papers and keep them in team piles. Take a piece of paper from one team’s pile and read out the first statement. Members of the other team quickly discuss and declare who they think it refers to. If correct their team gets three points. If wrong, the second statement is read out. Two points if correct, if not, statement three is read. This works best with a group of people that already knows most of the group, even if only by name.