Doing his DofE as an apprentice taught Bilal lifelong skills 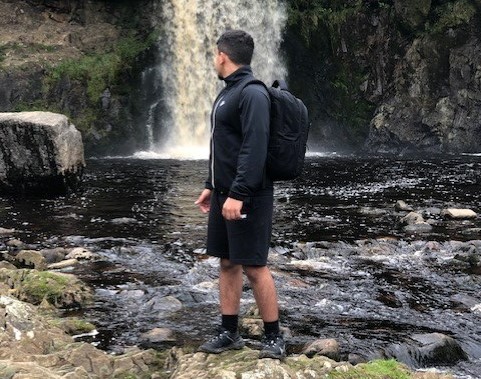 This National Apprenticeship Week, we hear from apprentice Bilal who achieved his Gold Award with Amey. Their DofE-based development programme is designed specifically to help young people negotiate a tough job market and learn practical skills that will give them real, long-term career prospects.

“I left school at 16 with no idea what I wanted to do in college so I just picked the course that my brother chose, a BTEC science course which was a path into many things like engineering, pharmacy, sports, sort of a blanket qualification. When I was just about to finish I came across the Amey apprenticeship and applied. When I went for the interview I talked about the DofE and the interviewer said that if he had two identical CVs, same grades and experience, the one with the DofE Award would get picked for the job because it is something that makes you stand out.

“The skills I learned taught me more about myself and my way of thinking. As responsibilities change in the workplace, your thinking and behaviour changes. It also taught me the importance of teamwork and how to function in a workplace. We were all 16 to 22 and all new to the workplace so this gave us the heads-up of what to expect. I also learned the importance of using ‘we’ rather than ‘I’ which enabled me to integrate within the team much more quickly.

Growing up in Bolton, Bilal says, there weren’t many role models, few young men to look to for guidance. He is determined to change that and has become someone that younger boys in his family and wider community will approach with questions. Bilal says that life is about choices and, too often, teenage boys can follow the wrong path with the wrong people. His hope is that he can use his experience to steer these youngsters along the right path, to teach them that there is ‘no easy fix’, that the only way to achieve is through hard work.

“I’d never done any volunteering before. I think a lot of people think it’s more of a chore, they don’t always see how it benefits others. I started football coaching for 2-6 years olds. Knowing that for some kids this football time was the highlight of their weekend – that, for me, was enough to continue coaching longer than I did for DofE. The two-year-olds would be with you until they were six and we had one who joined Manchester City Academy and you think, ‘Wow! We helped this child along that route.’

“We’re meant to have all the answers at 17 about what to do with the rest of our lives but we don’t know what’s out there for us.”