Erin completed her Bronze and Silver Award through her school in Coventry. She has one more year left at college and is then set on going on to become an eye doctor. Doing DofE has helped her with anxiety and self-esteem issues that she suffered from a little when younger, and she’s made lots of new friends through activities like doing aerial hoop for her Physical section. 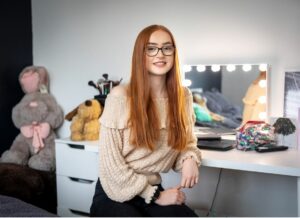 Photograph by Andrew Fox for The Telegraph

“As an early teenager, I struggled with confidence, public speaking, making friends and problem solving, I didn’t have any hobbies and only a few friends. When I first heard of DofE I thought it was just an expedition where people go camping with friends to have a good time. Since completing my Bronze and Silver Award, I can tell you it’s so much more than that! DofE has helped me in many ways; from new friendships to new experiences and a newfound confidence, DofE helped me discover the reward in volunteering and inspired me to learn new skills. I dream of becoming a doctor and know that because DofE taught me to step up, challenge myself, come up with new ideas to solve problems – I have the confidence to achieve it.

“When the pandemic hit and we went into lockdown, my anxiety levels sky rocketed. Even the smallest things would make me have a full-on breakdown. I was in year 11 and our exams, prom and leavers ceremony which was really difficult because the one thing I wanted at the end of year 11 was to be able to say that I’ve done it and I didn’t get that.

“It was really upsetting for a long time, we were all devastated, and it was really hard on all of us and we didn’t really know how to help each other, you can’t go outside other than for an hour’s walk so you couldn’t meet up with friends. It was really hard to get past it and get over it. It lasted quite a while but eventually we realised that it was going to be so much better when lockdown was over and we could see each other again, it made us appreciate each other more.

“I definitely think DofE helped take my mind off everything because I could do something different or I could go outside and just be in a different headspace. I tried not to let the news affect me because for the most part I knew what was going on, I knew that the COVID numbers were going to increase because people either weren’t following the rules or it was just spreading like wildfire. That constant ‘this many cases, this many deaths’ – it was upsetting to turn on the news and the end of the day and see that nothing had got any better. But I learned to try and ignore it.

“I think DofE has helped me because it’s forced me into new situations that I would never have gone into otherwise.”