Bronze training with a large cohort 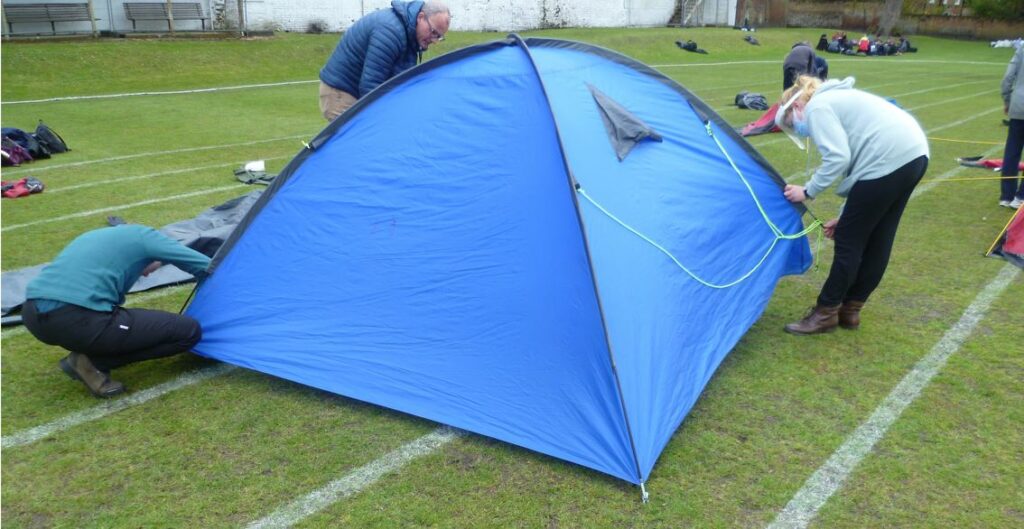 We spoke with a DofE Administrator at Norwich School, an Independent school in Central England about how they ran their expeditions with a difference during the pandemic.

Participants rotated around six sessions. Two DofE Ambassadors (Gold participants) ran one of the sessions. A member of staff new to DofE moved with the 13th group to give the session an extra adult and to allow her to watch and learn.

Tents: a talk about campcraft including checking and clearing the camp area, safety, distances between tents, use of Trangias and fuel, followed by erecting and packing tents (two and three person).

Route cards: a talk on how to plan the route and write a route card with laminated teaching aids, followed by writing a short two-leg route and comparing results.

Rope escape: a teambuilding exercise with variations on a theme.

1. The group stood in a circle with a rope at the back of their ankles and their arms remained crossed. Without talking, they had to get the rope up their bodies and over their heads to escape. The rope could not touch the ground until all of them were outside it or they went back to the start.

Variations included: everyone allowed to talk; everyone must escape the rope at the same time; one person elected as ‘leader’ and could talk; only those who escaped could talk to the others still trapped; Supervisor numbered each member before the start with #1 starting as ‘leader’ and Supervisor calling different leaders at set intervals.

2. The group stood facing away from each other with the rope round their ankles (much harder as there’s no visual contact). Same variations as above.

3. The rope had knots at intervals and each group member took hold of the rope with a knot between them and the next person. Without letting go of the rope at all, they had to untie all the knots. Same variations as above.

Menu planning: session on planning a light but nutritious meal, including the Lupine menu cards exercise.

Navigation: Moving and working as a team, team roles, compass and map work.

Lost at Sea: Their ship had sunk and they were in a boat with a list of equipment. They had to put the equipment in order of usefulness. Most groups ‘died’! Session run by Past Gold participant who helps at our Sea Scouts. Lost at Sea.

Day walk: the DofE Administrator had previously planned and walked a route around Norwich’s parks and Mousehold Heath area, starting and ending at the DofE centre. He then made various minor variations to split up the groups. Four groups set off at same time with route variants, next four groups left 10 mins later, etc. Each group had to navigate the route, finding various (different for each group) information on the way e.g. name of the vicar at a church, date a building was built, date on a tombstone, two coins hidden in a sign (Sports CENTer, Manager = John FARTHING), sequence of numbers in the area (garage numbers), etc.

The route cards had mistakes written in, e.g. turn left (N) when left = East, uphill instead of down, road names spelt wrong, etc. to ensure they were paying attention.

2. What did you need to consider?to organise?and lead this expedition??

“I am lucky to have a good staff base who volunteer for expeditions. Everyone knows expeditions just couldn’t happen without them giving up their time to help and support – and I highlight this to SMT every time! We also have foreign language student teachers, who like to join in and also learn a lot from the DofE ideas. For the training days, I found I had more than I needed; I think because it was a new idea and people wanted to see how it worked. There were visitors throughout the day from teachers and SMT.”

“The planning was the most intensive part. I had lots of ideas for activities but had to be realistic about what resources I could provide and what would engage the participants the most. I also wanted to have a plan I could re-use whenever needed. Planning the walking route took longer than I thought, sometimes because I discovered something and explored! but also finding questions for them which made them search but were also not too hard e.g. if it was ‘tipping it down’ on the day! I also had to consider, even though it was a school environment trip, the impact of a group of seven plus an adult walking about during covid restrictions, so quiet and side roads had to be used.”

3. As a Leader, what did you notice about the outcomes for participants doing this expedition??

Staff said they had enjoyed the days. They saw their pupils in a non-classroom environment and showing different personal skills. On example was a pupil who was normally quiet, taking a vocal lead in an exercise and getting the group out of the knotted rope where, before he spoke up, they were creating more knots. A Maths teacher visiting and watching the route card session, was pleased to see one of her pupils, who is normally slower at maths problems, finishing her timings first and adding up the overall distance and time correctly – an example of the pupil seeing the direct relevance of the maths to real life, perhaps.

Feedback from participants was very positive, saying they not only enjoyed the day but also learnt a bit about themselves. Parent feedback was also positive, with lots of chat about the day being had.

“Group challenge exercises help bring the group together and made them work as a team. The exercises also took them outside their ‘comfort zone’ and encouraged them to view challenges in a different way.”

Teachers reported a lot of chatter and laughter from participants following the training days, showing it was well received, they learnt from it and, most important, they enjoyed it.