14-year-old Edward was enrolled in his Bronze DofE programme at the start of March, less than two weeks before the nation was put into lockdown. Despite this, he was eager to start his programme, and immediately started exploring activities that he could complete from home.

“I was so looking forward to taking part in the DofE. However, the current situation, has meant that I, along with many others, am having to find ways to participate at home.”

Having never completed a long distance run before, Edward has set himself the challenge of running a marathon in his back garden for his Physical section. “I have downloaded a few different training programmes that relate to long distance running. I will undertake training by gradually increasing my distance before hopefully completing the full 26 miles.

“My Dad and I measured our garden in metres and then worked out how many laps of the garden I’d need to do for a half and full marathon. 371 laps for a half and 740.2 for a full!” 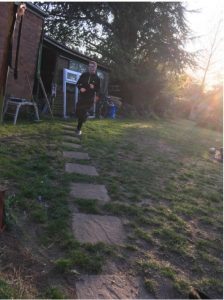 Edward’s first 5km saw him complete 87 laps, and he is going for regular walks in the local neighbourhood to rest his knees between runs.

Alongside his physical activity, Edward is also making the most of his time at home by learning to cook food for his family for his Skills section. Using a variety of resources, including cookbooks, TV programmes and online material, Edward hopes to be able to create three different three course meals from around the world. So far, his family have been treated to pasta, sushi and glazed fruit.

For Edward’s mother, Faye, his DofE programme has been a welcome source of structure and a distraction from the isolation. “Edward has had some really down days, missing his friends and school, the rugby team he is captain of and his karate classes. Having the DofE has meant he can occupy his mind, learning new skills as well as keeping fit and active. I think it has kept his mind in a good place, and as a parent I have enjoyed my nights off from cooking (although I sometimes have to wash up!). It’s a pleasure to watch him improve and grow in his skills in the kitchen; it’s something different from the normal routine, everyone needs that.”?

Rosie Vickers, DofE Manager at Hobart High School in Norfolk, has been impressed by Edward’s commitment and the versatility of his cohort. “Edward is one of our Year 9s who have just started their DofE, having enrolled this group at the start of March. Edward has cooked amazing dishes for his skill, and as well as uploading pictures as evidence onto his eDofE account, he also kindly arranged for samples of his cooking to be dropped off at school for the staff. I have been really impressed by all of our students across Year 9 – Year 11 who have come up with loads of interesting ways to work on their DofE sections from home.”